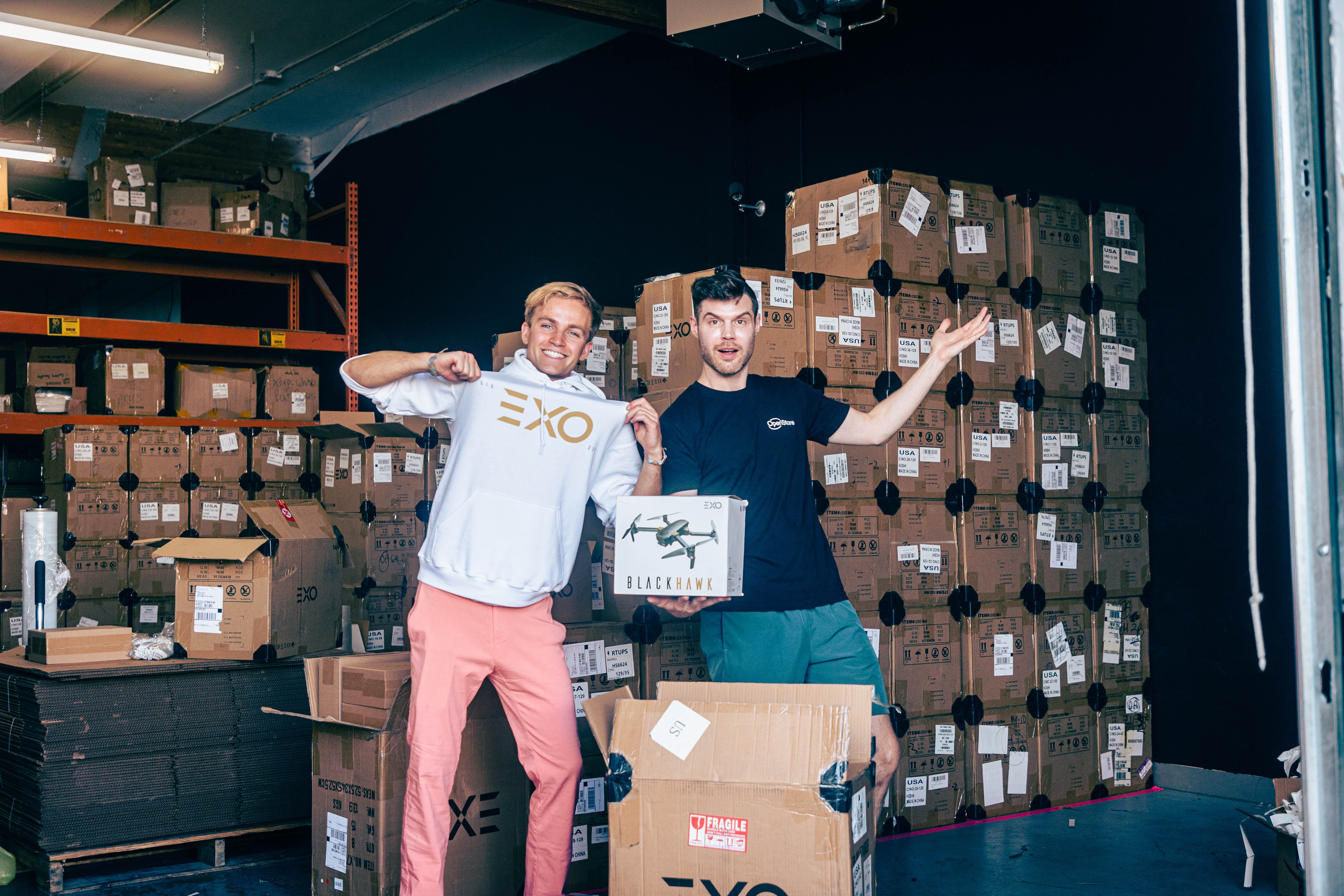 ‍EXO Drones is the premier brand for high-end, affordable drones. Whether you’re a hobbyist, a creative, or a professional, their easy-to-fly drones and live user support have you covered.

The company was acquired by OpenStore in August 2022 for $2.9M in an all-cash offer.

We sat down with Charlie Cannon, Founder of EXO, to hear how OpenStore seamlessly acquired his business and provided the seed capital to launch his next Shopify storefront.

The first piece of our two-part conversation dives into:

“After choosing OpenStore, I sold my business in two months — a year sooner than I expected. That year of my time is worth millions to me.”

Before Charlie considered entrepreneurship, he was, first and foremost, a filmmaker.

He’d taken a gap year from college to shoot a movie and successfully broke even — except for four damaged drones. He called user support and had, in his words, one of the most angering conversations of his life.

Soon after, he realized there were only one or two names dominating the entire drone industry.

That meant they could get away with imperfect products and, yes, shoddy customer service.

The ecosystem was primed for a new player. And he was an ideal candidate — for three reasons:

Everyone else was failing to deliver affordability and top-notch customer support. So, Charlie would have to do it himself.

Scaling the brand to profitability

Using online research, lots of trial and error, and his video and storytelling skills, Charlie cobbled together an appealing website.

Next, he held true to his promise: selling drones at an unmatched cost for the level of tech.

At that point, the most popular drone products on Google Ads were either overpriced or completely subpar. There was nothing in the middle. So, if the leading brand’s cheapest SKU started at $400, EXO would start at $200.

Things accelerated even more once he published some Facebook ads.

In about one week, they saw $4,000 in sales. He could barely keep up with reordering inventory.

At one point, he traveled to Vermont to shoot drone content and checked his phone at the end of the day. They’d made $3,000 in 24 hours.

“We’d get more inventory, then sell out of that in, like, a week,” Charlie recounts. “I had to hire my first team members. It all just kind of snowballed.”

“We had made almost a million dollars in profit in two months. I was a freshman in college. It was crazy. It was everything I’d ever dreamed of.”

Meeting OpenStore: how to find the right buyer for your brand

In 2021, EXO’s small team decided it was time to clean up the business. They began prepping everything on the back end to scale into a potentially billion-dollar company.

They lost focus on front-end ops, namely marketing — which had been their only source of acquisitions and profitability. Their expenses quadrupled as a result.

The company broke even for four months while Charlie fixed ads and customer service. “It was just getting to be too much work,” he remembers. “We had so much debt. No one was having fun anymore. It was very much a grind.”

EXO was positioning themselves to become the next billion-dollar drone brand.

But Charlie knew what that experience would look like — and he wanted no part of it. So, they resolved to build their numbers for the rest of 2022 and sell the whole thing.

He quickly realized a traditional buyer wasn’t the solution.

To put it simply: Despite dropping out, he was still a typical senior in college. He wanted to be free ASAP to spend time with friends before everyone went their separate ways.

A traditional buyer wouldn’t be able to give him that.

He knew selling immediately would be the right move.

“All we needed was enough capital to start the next business. I didn’t tell anyone I went to OpenStore, because I had a feeling something good would happen here.”

Why OpenStore was the perfect home for EXO

Having gone through our acquisition process, Charlie highlights three reasons why any e-commerce founder selling their business should turn to OpenStore.

A straightforward process — no strings attached

He breaks down the timeline of selling and closing with OpenStore:

OpenStore wound up purchasing EXO Drones for roughly $3 million. Once Charlie realized we were serious about “no earnouts” and “fast cash”, he was fully onboard.

He only has to stay with EXO for about two months to facilitate the handoff. In comparison, he’d expected the transition to take anywhere from six months to a year of obligation.

From end to end, he’d describe selling to OpenStore as “super chill.”

OpenStore’s model is the antithesis of flaky brokers

While considering potential buyers, Charlie was concerned about undergoing a months-long process — due diligence, transferring assets, etc. — only for the other party to back out.

“If that happened, we would’ve run EXO like shit for three months,” he explains, “because that process took so much time. And they’ll do that. They try to fuck up your sales to get a lower price. That possibility scared the hell out of me.”

In comparison, OpenStore approached him with a serious offer and intent to execute.

He knew that, as soon as both teams signed that contract, he could count on us to:

Your brand will be in capable hands — for the long haul

Charlie admits he was skeptical that any buyer could effectively take over EXO — much less continue scaling it. After all, consumer electronics brands are uniquely difficult in having to juggle software, international shipping, customer tech support, etc.

He was pleasantly proven wrong once he met the OpenStore team.

Not only could they recoup the cost of acquisition, they were undeniably smart enough to grow the company in ways he couldn’t on his own.

“After actually meeting with them, I realized, ‘This team is very qualified.’ OpenStore has picked out a lot of really good, really smart, and really hard-working people.”

For instance, he emphasizes how OpenStore is willing to match the energy of the startups they acquire. If a task was dire, our team wouldn’t hesitate to reply to emails at 10 PM.

“We decided to sell on June 27. We got the offer, did the due diligence, and signed our final OpenStore contract on July 25. We literally sold a month later.”

How OpenStore provided the freedom (and cash) to start fresh

Looking forward, Charlie explains how OpenStore has set him up for his next e-commerce project:

“We get to start over — zero rat’s nest. We get to build something with the e-commerce experience and the infrastructure to scale from day one.”

He’s working on a brand to disrupt the skateboard, longboard, and electric board industry. As he describes it: “I know we can build a nine-figure company out of this product.”

In addition, this brand will accomplish another lifelong goal of his: protecting the planet.

At the moment, he anticipates using anywhere from 25–50% of their forthcoming profits to contribute to environmental causes.

He’s excited to get started in earnest. And none of it would be possible without the freedom, peace of mind, and funding provided by OpenStore’s acquisition of EXO Drones.

“The OpenStore team can run this company. I’m getting out of the business. I get to do what I really care about now and try to change the world.”

Find out what your Shopify store is worth